For the first episode, we headed on down to Hiroshima, where me met up with Haruna Ai-san (a well known Japanese personality) and 50 local runners.

The course, which I’d spent a few weekend planning, consisted of over 300 GPS points that had to be run to and recorded using Runkeeper, all in the correct order. If any were out of place, it could be disastrous! Using Runkeeper Go, the data was streamed live to my mobile station, a van I’d kitted out with multiple computers and screens to track all the runners in real time. The 6 teams set out at 8am, and over the next 8 hours ran far and wide across Hiroshima, gradually drawing the 100km+ picture.

It was magical for me to see the picture gradually assemble itself right before my eyes! For the finale, all teams headed for the Mazda Baseball stadium, home to Hiroshima Toyo Carp, where the final image was revealed on the big screen: Carp Boya, the wildly popular team mascot that also represents the city as a whole. 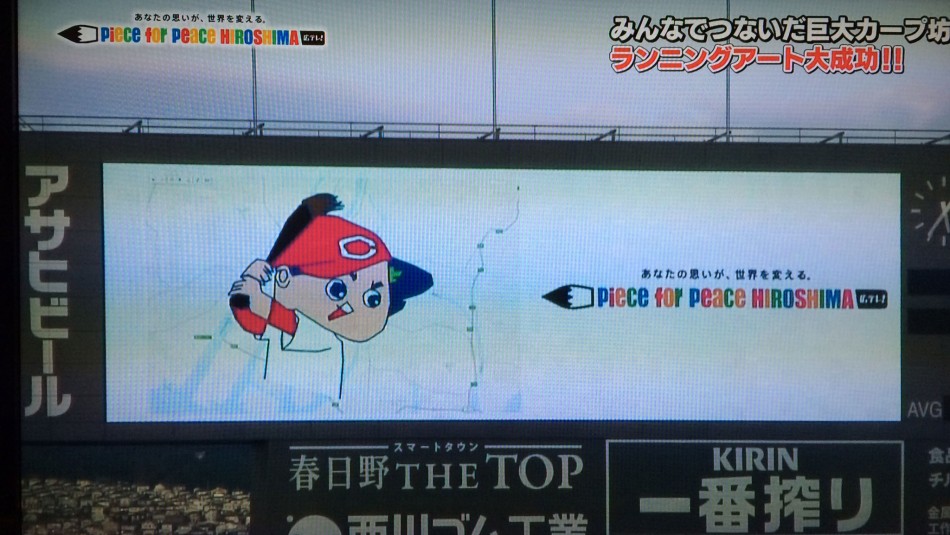 The first episode was broadcast on Hiroshima TV, and then nationally on BS NTV in November 2015. Episode 2, which was filmed in Tokyo in early December 2015, saw the 50+ runners take on an even more challenging design – a traditional Ukiyo-e’ – which although a little shorter in length, contained some really complex parts (one section could only be done by running circles around the roof of a bicycle park!) This again was a huge success, despite the intermittent rain. Everyone did a wonderful job – the local running groups, the amazing TV crew, and Haruna-san. Together we completed a fabulous piece of running art, covering over 80km of road around Tokyo SkyTree. The final episode, filmed in March 2016, saw us travel down to Kamakura, where the local teams took on a really tough challenge – drawing a huge traditional dragon in the hills and along the coastline. The inspiration for this design came from local legend. Huge thanks to everyone involved in making this series possible. The many many hours of preparation all paid off in the end!