The Art of Running: 116km Anpanman – Preparing for Fatherhood With the birth of our first child fast approaching, I’ve been feeling increasing pressure from all those around me. They keep on asking, “So, are you prepared for fatherhood?” 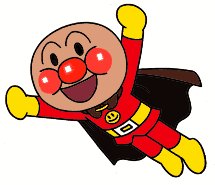 This question left me a bit stumped. I mean, what was I supposed to do? Practice putting nappies (‘diapers‘ for those of you who speak slang) on my wife? Set an alarm clock to wake me up every two hours throughout the night? Start talking in baby-language to our pet penguin? Instagram endless pics of mushy food?

Then it hit me – I needed to learn all about Anpanman, the star of the 40-year-old anime series that 99.5% of kids in Japan grow up with. After all, this character is going to mean everything to my son at some point in the future, and in order to appear as the all-knowing superhero in my son’s eyes, I need to get to know Anpanman intimately.

I need to understand his every curve, his every junction, his every annoying-bit-under-his-chin-where-his-cape-fastening-requires-complex-running-backwards-and-forwards-down-dead-end-streets part.

What better way to do this than run 116km on the streets of Tokyo with a GPS tracker recording my route, a route that when viewed from above depicts this superhero flying high. It was a daunting task, but someone had to do it. And seeing as I am the only father to my son, it had to be me.

This was a challenge long before I slipped into my neon shoes. First came the planning …hours of planning. Anpanman doesn’t just pop up anywhere. He has to be sought out amongst the giant buildings of the urban jungle.

Eventually I found him, the tip of one of his boots conveniently located just to the north of  Tokyo Dome, within a couple of minutes of our home. I broke him down into a series of shorter runs, allowing me to piece him together section by section even whilst I had a hectic work schedule (see the Runkeeper activity links below). The start point, just to the north of Tokyo Dome. This image from Google Earth shows my course in red. The run wasn’t without its hiccups. A little way in to the project I installed the latest iOS beta version, which I soon found had a habit of crashing, resulting in total data loss. It was for this reason that I ran his legs twice. Then Google released a new version of Google Earth for iOS, which for some bizarre reason doesn’t track your location if you touch the screen. This made it impossible for me to follow my prescribed course – thankfully I found an older copy of Google Earth on a legacy MacBook and was able to restore to that. Google Earth on the Mac however has seen big improvements lately. The number of accurately-drawn 3D buildings is staggering. This is our building in the foreground. Looking north you can see traces of my course. Google Streetview has also been updated, and will now overlay the street photos with your GPS track, as seen here. Whilst I remain amazed that my tiny little iPhone can communicate with satellites and cell towers to determine its location so well, as you can see from this angle it’s not always perfect. The route often shows me running straight through brick walls. However, on a picture of this (large) scale that’s not really a big deal.

In the end it took me 13 runs to complete this 116km Anpanman, but I’m pretty pleased with the result. I can’t wait to show my son when he’s born (I’m getting him all enthused about it now by explaining to him what I’ve done by talking into mummy’s tummy. So far his only response has been to kick me in the face – that’s a good sign, right?).

It’s been great to get back out and run after a work-induced break of a month or so. This is the largest Art of Running piece I’ve done to date, beating my previous record (the Nike shoe) by 16km. It took me to places I have never explored before – the heavily residential cities of Bunkyo-ku and Itabashi-ku.

There were several surprises along the way: at one point I had to run through a school campus, and was delighted to realise it was Rikkyo University where I’d studied for a year in 2007 and not visited since. During another run I found I was approaching our old house, and after that the park where I proposed to Twinkle Tame.

Overall, this made for a very memorable project. A lot of positive exchanges with people along the way, and that final satisfaction at completing a tough sporting challenge.