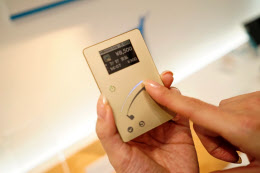 Sony working on wearables featuring their contactless IC Chip technology ‘Felica’ Chip Technology, with a goal to bring products to market in 2015 (Japanese only): ソニー、ウエアラブルで決済 「小型フェリカ」開発

Felica technology, used in IC cards such as Japan Rail’s popular Suica card, and built into many smartphones in Japan, is now used to make payments totalling over 300 million yen annually, in addition to being used for ID systems. Currently, it is limited to devices that contain the Felica chip. However, Sony are now working on making it available on other devices, such as Apple’s iPhone, through Bluetooth technology.